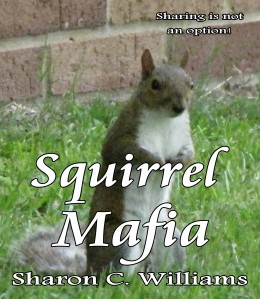 How attached are you to your MS? While waiting for my book to come out, I submitted a second MS to my publisher. I wanted to see if she would pick it up. She really liked it but wanted me to make it fictional. The premises of my MS, “Squirrel Mafia” is my year-long war with the squirrels in my backyard. The book is 100 percent true.

When she told me she wanted it I took a step back. It would mean a major rewrite if not me totally starting from scratch. I did like the idea for I could envision where I would take it. But I love this MS a lot. I love it so much that I turned that down and decided to keep it as it is. Yes I could have had a potential book being published. Now a days who am I to turn that down? But I did not want to take away from the vision of this book I wanted the world to know how truly evil squirrels are. I should know. I been observing them for a while now.

So again I ask how attached are you to your MS? Would you have broken down and rewrote your MS or not? I can imagine there are authors out there who do make the change that is asked of them to get their book published. I don’t mind slight revisions but when it is no longer what you had in mind then I have to say no.

Will this hurt me in the long run I don’t know. I been submitting “Squirrel Mafia” actively since August. But I am now done. I have had some nibbles and am hoping someone goes for a second bite. Just this week I had one publishing house ask for a formal TOC and a cover letter with my marketing plan for the MS.

I believe in this MS. Even if it means I end up self publishing it. I don’t want to change it so much that it is a shadow of what it once was. For me that would be worse than it not being published at all.

4 thoughts on “Revision: How Much is Too Much?”