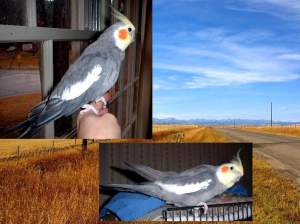 A lot of people have asked me how my first bird ended up with his name.  Twopiece and Maxie came home with me in the spring of 1998. Their previous owner had returned them. Why I do not know. Their age was unknown as well as their names.

While Maxie was named by my young son her bonded mate was a different story. As in most families that include pets naming is something major. You can’t just give the animal any name. This takes some thinking. There are times that some names just fall into place and suits the animal.

When my son named Maxie she well looked like a Maxie to my son so it was a no brainer. Twopiece was different. I was in the car with my husband and a friend one day.

Me: “I can’t seem to think of the right name for my male tiel.”

Friend; “ I know what you can call him.”

Friend: “You should call him Twopiece. He is about the size of a two piece chicken meal deal at KFC”

All of us busted out laughing for it just struck us as funny and we continued to where ever we were going. But that did stick for every time I looked at my little male bird that name kept coming up. He was not particularly very big. Maxie was twice his size.

Approaching him one day I said, “Good Morning Twopiece.”

He looked up and started to sing. Now of course this is not earth shattering but the name suited him so well. It has stuck and now I can’t even remember the other names I had tossed around in my head after bringing him and Maxie home.

Twopiece is not the average name one would call a pet regardless of the species but I can truly not see him being called anything but this. It fits him like a glove..